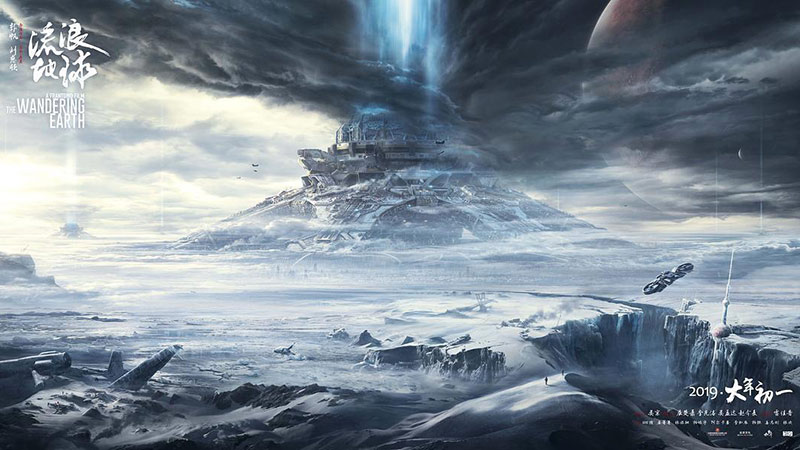 In the near future, scientists have discovered that the sun is rapidly aging and expanding, and in a short time, the entire solar system, including the earth, will be swallowed up by the sun.In order to save themselves, human beings put forward a bold plan named "Wandering Earth", that is, the global effort to build tens of thousands of engines and steering engines on the surface of the earth, to promote the earth to leave the solar system, with 2500 years of time to another habitat.Chinese astronaut Liu Peiqiang went to the International Space Station when his son, Liu Qi, was four years old, taking the lead from his international peers.Then Liu Qi grows up, he is taking the little sister blossoming secretly run to the surface, steal the transport car that opens grandfather Han Ziang, finally he  arrested not only, but also encountered the event that global engine shuts down.In order to repair the engine, preventing  the Earth from falling into Jupiter, the world began to launch a saturation rescue, even Liu Qi and their car was forced to join.In the process of racing against time, countless people fell upon one another, regardless of personal danger, only to continue the hope of survival of one hundred generations of children...The film is based on Liu Cixin's novel of the same name.

In recent years, Beijing Culture has appeared repeatedly. From Wolf Warrior 2 to Dying to Survive, from A Cool Fish to The Wandering Earth, Beijing Culture has gradually summed up a set of customized marketing strategy, and based on the high-quality content, gradually put the film's reputation to the maximum and break through the circles

The Chinese film market in 2019 has burst out the strength that has been accumulated for a long time. The genre success represented by Zha and The Wandering Earth points out an important breakthrough direction for the Chinese film industry.

Since 2016, the growth rate of Chinese film and television industry has slowed down, the production cost and marketing cost of domestic film and television works have been rising, but the box office acquisition has become unstable, and the degree of polarization has been deepening. The proportion of the box office of top films has been increasing year by year, and the growth logic that once relied on the incremental market has also started to fail.